The only type of dumplings I ever had growing up were boiled dumplings because my mom always said it was the healthiest and didn’t need any extra oil. It was also the fastest and easiest method to cook them when you’re whipping up a large batch to feed a family of 5! When I moved out from home, I learned how to pan-fry them from my fellow dumpling-loving friends. Pan-frying takes a little extra effort, but the yummy crunchiness is worth it. I find boiling is best for dumplings that have a filling with a stronger flavour such as my lamb and onion dumplings. Pan-frying is better in fillings with a lighter flavour such as these vegetable dumplings where you can notice the extra fried toastiness.

Every Asian household tends to have their own little variation in how they cook their dumplings and there are a few methods to cooking them. In this entry, I’m sharing the two ways I cook my dumplings: pan-fried and boiled.

You’ll need a flat wok or pan with a lid for this method. The method is essentially first steaming the dumplings with a bit of water and oil. The steam from the water cooks the filling and the skin of the dumpling, then the remaining oil cooks the bottom of the dumplings for crispiness. 👌

1. Heat up a flat wok or pan on MED heat. Add a drizzle of neutral oil and place the dumplings fat side down on top of the oil then add in 1cm of water.

Try not to crowd the dumplings so they don’t stick together and makes it easier to flip.

2. Put a lid on over the wok and let the dumplings steam.

3. Once all of the water evaporates, remove the lid and check the bottom of the dumplings for a golden brown colour and flip them over. If they’re not yet golden brown, continue cooking the dumplings.

4. Once the bottoms are golden brown, flip them over and cook the other side of the dumplings until golden brown. You can add a little oil to the pan so they brown up a little faster.

5. Serve while hot with your favourite dipping sauce!

This method is a lot more straight-forward. You’re essentially boiling the dumplings until the insides are cooked. Make sure your dumplings are sealed well, otherwise the filling will fall out in the boiling process. Try not to over boil it, or else the skin will become too soggy and break apart. If your dumplings are stuck together from the freezing process, just throw them in the pot altogether. Do not try to break them apart of else the skin will break. They will naturally separate in the pot.

2. Once the water is boiling (we want a big boil where the water is moving vigorously, not just a simmer), gently drop in the dumplings, careful not to splash yourself!

3. When the water starts boiling again, add in a cup of cold water.

4. When the water starts boiling again, add in ANOTHER cup of cold water.

6. When the dumplings are cooked, strain them from the pot and transfer to a plate. Add a drizzle of sesame oil (or neutral oil) and mix it around to prevent them from sticking together. Serve with your favourite dumpling dipping sauce!

Polyphagia: a strong sensation of hunger or desire to eat – usually leading to overeating (story of my life!) 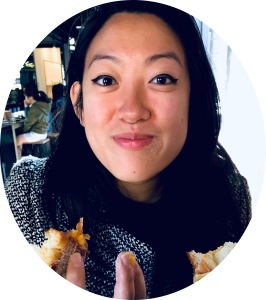 Hello! I’m Abby. Veterinarian by trade and stuffs-my-face with food by choice. If I’m not out eating good food, I’m experimenting in my kitchen. This blog is a place to share my love of food and favourite recipes with friends, family, and you! Read more about me here.